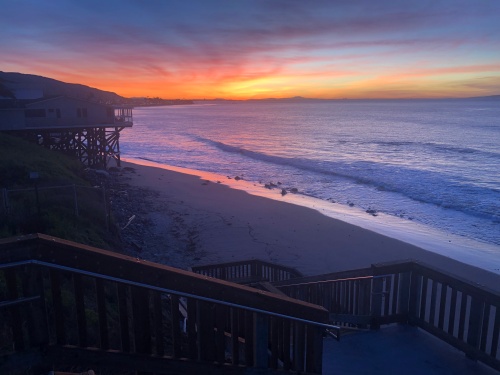 “Life is all memory except for the one present moment that goes by so quick you can hardly catch it going.” – Tennessee Williams, The Milk Train Doesn’t Stop Here Anymore

To say there is much to do this week is an understatement that borders on absurdity. My farewell sermon yesterday was followed by such a sweet farewell reception—that all four of “us” could be there was very special—but now the rollercoaster whips around an unexpected turn and we will worry about breathing later on. The week ahead is packed floor to ceiling (hey, like that moving metaphor?) as we tie up loose ends and then move to a new stage of life in Tennessee.

Maybe I will just say that our time here has transformed our lives in every conceivable way. Physically. Intellectually. Professionally. Emotionally. Spiritually. You name it.

And we are thankful.

I have been told repeatedly that I will miss the views here. With all due respect, I don’t believe it. Those views have been permanently imprinted on my memory and will always be nearby—and I’m not simply referring to the natural scenery. Edgar Allan Poe said, “To observe attentively is to remember distinctly.” If nothing else I was sure to pay attention, so I’m not worried.

I have shared my favorite Wendell Berry Sabbath poem before, but it is most appropriate today:

We travelers, walking to the sun, can’t see
Ahead, but looking back the very light
That blinded us shows us the way we came,
Along which blessings now appear, risen
As if from sightlessness to sight, and we,
By blessing brightly lit, keep going toward
The blessed light that yet to us is dark.

So here we go on these crazy final few days. I will blog from the road next week—Lord willin’ and the creek don’t rise. The South, here we come. 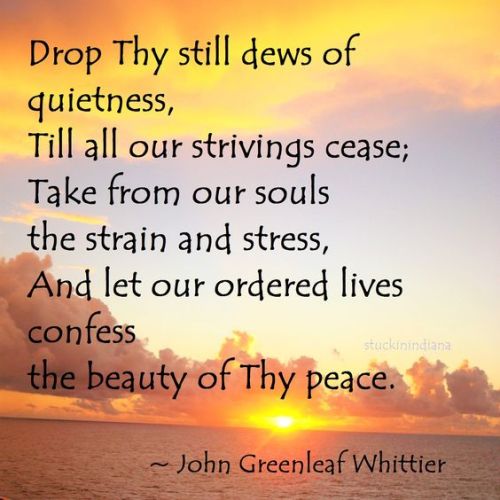 The classic Christian hymn, Dear Lord and Father of Mankind, contains the line, Drop Thy still dews of quietness / Till all our strivings cease.  That last part just sounds terrible.  You see, I’m a striver.  Striving’s my thing.  I like accomplishment.  Give me a problem to solve, yours or mine, and I will strive all day and night to solve it.  One of my latest projects is striving to learn how to take a break from striving, which it turns out is just as complicated as it sounds.

Last week Pepperdine hosted theologian, Miroslav Volf, who in his final lecture extolled the Jewish practice of Sabbath as a weekly event where one stops striving.  I have long agreed with that concept but am just terrible at it.  Since my new preaching gig sees Sunday as work day, I approach Friday-Saturday as weekend and Friday in particular as a personal sabbath.  Well, that’s the idea at least.  It hasn’t gone well so far.

For starters, I don’t want to stop striving for a day.  I prefer catching up on unfinished striving and go a little bonkers ignoring things that need attention when I actually have time set aside to do them!  But even when I try, presumably non-striving activities morph into things to accomplish.  A nature walk becomes the quest of the perfect picture or story.  A novel becomes a mission that needs to be completed in a certain time frame.  A sport becomes a personal competition.

I am more than a little nutty.  How exactly do I not strive?  I could say that I will work on it, but that is exactly the problem.

John Greenleaf Whittier wrote that 19th century poem-turned-hymn that imagined the cessation of strivings.  Ironically, he hated the very idea of singing in church and wrote the poem to promote silent meditation in contrast to musical worship, but his poem became a tool of the thing he despised.  Life is funny.  He was also an abolitionist, who in his lifetime saw the passage of the Thirteenth Amendment abolishing the practice of slavery in the United States.  So he was a striver, too!

Well, obviously striving and Sabbath are teammates, not opponents.

Breaks are important for any endeavor, which obviously includes life itself.  This may not come naturally to me, but the secret just may be when it no longer feels like something to accomplish.  Stopping is the opposite of accomplishment.  It is a gift.

So we wait four whole years to get an entire extra day again and it turns out to be a Monday. Darn the luck. Rumor has it that Leap Day will be on a Saturday in 2020—as it should be—but this go around . . . Monday.

So what will you do with this rare gift of an entire day? My guess is go to work, so on, so forth. Just another Monday.

But, what if. What if you really did have a free day, twenty-four hours with no responsibilities, what would you do? And while we’re in make-believe world, what if it didn’t have a name like Monday (work) or Saturday (take the kids to soccer) or Sunday (go to church)? What if we made up a cool name like Freeday so that there was no lurking guilt as to what you should be doing that day instead? How would you spend Freeday?

And what’s stopping you?

My good friend, Wikipedia, told me that Leap Day occurs in most years divisible by four but not years divisible by 100 unless divisible by 400. I’m not making this up. Some cat named Pope Gregory XIII did make this up 400+ years ago, so I’m asking, why can’t you make up some math and declare a day all for you?

I say pick a day and go for it. Time is a precious gift, and observation tells me that it eventually runs out on all of us, so why not resist the forces working against you and seize a (Free)day.

The Judeo-Christian heritage calls such craziness “Sabbath” with a recommended dosage of once a week. But once every four years is better than never.