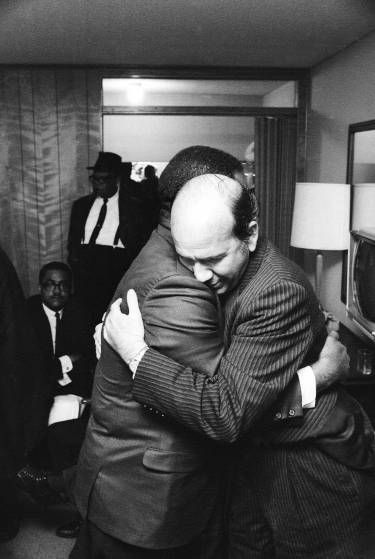 Ralph Abernathy and Will Campbell grieve the assassination of Dr. Martin Luther King, Jr. in the Lorraine Motel (April 1968)

“I believe that unarmed truth and unconditional love will have the final word.” – Dr. Martin Luther King, Jr.

I was deep in the heart of rural Texas when the chaos in Charlottesville unfolded last weekend and found myself in a conversation with a couple of local police officers about other matters. I mentioned that they should visit us in California sometime and one offered a kind smile and said, “Nah, Californians don’t like Southern Republicans.” We laughed, but there is some measure of truth to his statement. And vice-versa, of course. There is plenty of not liking to go around these days.

I am a Christian, which unfortunately means many things to many people, but for me it means that I must love everyone. No exceptions. So I stand in opposition to hate in any form, which most assuredly includes all versions of white supremacy. And because I must love everyone then I am necessarily opposed to acts of violence. It is a package deal. Violence toward a loved one is unfathomable, so when you choose to love everyone it kind of takes the wind out of Violence’s sails.

“‘Don’t the Bible say we must love everybody?’ / ‘O, the Bible! To be sure, it says a great many such things; but, then, nobody ever thinks of doing them . . .'” – In Uncle Tom’s Cabin by Harriet Beecher Stowe

Will D. Campbell is a personal hero of mine who was an important leader in the Civil Rights Movement and a fierce advocate for the victims of deep racism. However, Campbell started to notice that many of his fellow activists used the same dehumanizing language  and tone toward the “segregationists” that segregationists used toward African-Americans. Since Campbell was a Christian, he took a stand against that, too.

“With the same love that is commanded to shower upon the innocent victim of his frustration and hostility, the church must love the racist. Moreover, the church is called to love those who use and exploit both the racists and their victims for personal wealth and political gain. The church must stand in love and judgment upon the victim, the victimized, and those, both black and white, who exploit both, for they are all the children of God.” – Will D. Campbell, in Race and Renewal of the Church (1962)

Some things in this country have improved in the half century since the milestone moments of the Civil Rights Movement while many others have quite obviously not. And the version of Christianity touted by “Brother Will” and Dr. King often appears unopened in the shrink-wrapped box.

But I remain hopeful. For I, too, believe that unarmed truth and unconditional love will someday have the final word.