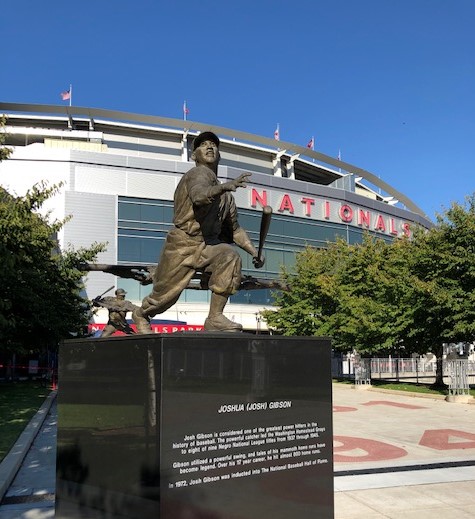 I arrived early at Nationals Park for Game 4 of the NLCS and did a lap around the stadium to see the sights. I discovered three statues near the home plate entrance, and as a student of baseball history anticipated two of the honorees—Frank Howard and Walter Johnson. But I confess that the Josh Gibson statue was a most pleasant surprise.

Not that Gibson, the greatest home run hitter in baseball history, does not deserve a statue. Quite the opposite. Gibson hit more home runs than anyone, including the longest home run in the history of Yankee Stadium. Some called him “the black Babe Ruth,” while others preferred to refer to Ruth as “the white Josh Gibson.” No, I was surprised to see the statue since Gibson, simply because of the color of his skin, was never allowed to play a Major League Baseball game.

In certain ways there has been undeniable progress in race relations in this country, thanks in part to baseball and the heroism of players like Jackie Robinson. When the team from our nation’s capital takes the field tomorrow night in their first ever trip to the World Series, their roster will feature players from Brazil, Cuba, Dominican Republic, Venezuela—and the United States. And from the United States, alongside white, European-Americans you will find African-Americans, a Japanese-American, and a Mexican-American. It is a beautiful thing to witness.

But do not be deceived. Progress is simply signage on the road to somewhere, and the destination most assuredly remains on the farthest horizon.

Josh Gibson’s statue outside a Major League Baseball stadium in our nation’s capital honors one of the greatest baseball players of all time. At the same time, it reminds us that he was never allowed on the team. Both deserve remembering.