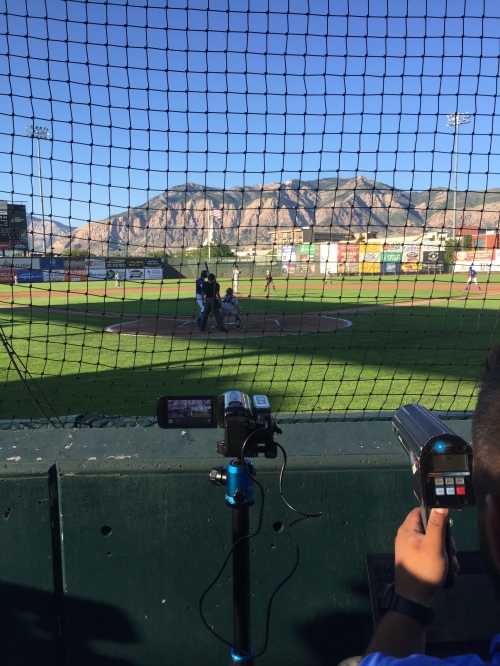 There is nothing quite like minor league baseball. Young and hopeful talent, goofy small-town promotions, and unsurpassed fan access all wrapped up in a classic sport.  On my recent stay in Ogden, Utah, I could not pass up the opportunity to see the hometown rookie league affiliate of the Los Angeles Dodgers in action, so I splurged the twelve bucks required for the best seat in the house and sat on the second row behind home plate in the middle of scouts with radar guns evaluating the 18-24 year old athletes on the field.  It was awesome.

It was clearly the minor leagues, however, complete with the civilization-insulting Chicken Dance, a corny hometown announcer, and a grounds crew consisting of a grown man dressed like Elvis and two unfortunate children dressed like a Dalmatian and some sort of hound dog. If I was the kid dressed like a hound dog sweeping the dirt, I would be crying all the time, too, simply from sheer embarrassment.

I ignored sound nutritional advice and downed a hot dog, nachos, and churro and root, root, rooted for the home team Ogden Raptors like I was a local. There was no shame in Ogden that evening since a couple of teenagers planted home runs over the sponsorship-laden wall en route to a 3-1 victory over the Grand Junction Rockies in exciting Pioneer League action.

I couldn’t help but think of my trip to Dodger Stadium earlier in the summer when I paid much more than twelve bucks to sit about as far away from home plate as one can manage and still be in the ballpark. The Dodgers are the hottest team in baseball this year and are the darling of a star-studded city, and not that long ago their crazy good all-star rookie Cody Bellinger was just a kid playing for the Ogden Raptors. As was their all-star closer Kenley Jansen. Even the legendary Dodger manager, Tommy Lasorda, once managed the Raptors, too.

The road to the big show always begins in much smaller places. To me, those small places where dreamers set their sights on the distant mountaintops are more fun than the actual object of their dreams.