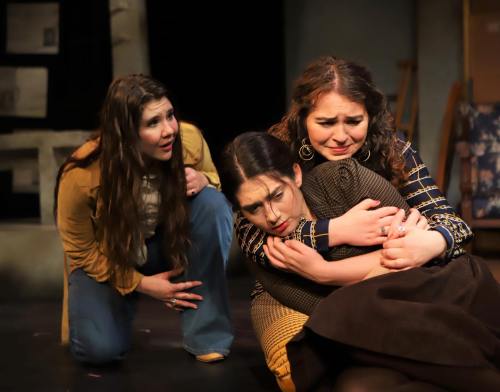 I caught a bit of the Oscars last night and found myself wondering if I might see someone from the Lipscomb University Department of Theatre walk the Hollywood red carpet someday. I am a big fan of Lipscomb Theatre! On Saturday evening my wife and I went to campus to see Kindertransport, and although I expected to be impressed, I was not prepared for the show. When I first saw the name, Kindertransport, I envisioned a play about a school bus. Oh no. Kindertransport is an intense and powerful story.

The story is historical fiction. Prior to the outbreak of World War II, thousands of Jewish children refugees were hastily transported out of Germany to escape the coming savagery. As Dr. Jay Geller, Professor of Modern Jewish Culture at Vanderbilt University who served as theater consultant wrote in the program, “German Jewish parents and their children faced the terrible dilemma of choosing between a perilous staying together and a temporary—quite possibly permanent—separation as well as having to imagine the parent’s possible death and the child’s possible survival.”

Kindertransport is a vivid portrayal of how that might have played out for one family. The entire cast was amazing, and thanks to their masterful storytelling, I cannot stop thinking about it.

As a former history teacher, I am always stunned when I learn of moments in world history that I had never heard of before. I learned on Saturday evening that the United Kingdom welcomed 10,000 unaccompanied Jewish children before Nazi Germany closed the borders prior to the outbreak of World War II but that the United States rejected legislation to do the same based on public opinion polls. The talk-back after the show shared that a large number of Jewish refugee children actually arrived at an American port but were sent back to Germany because of the policy. How many of those children were murdered as a result of that decision?

It was easy to connect the Kindertransport story line with our friend at Pepperdine, Hung Le, simply substituting a different place and a different war (Vietnam), and how his beautiful story came to bless so many lives (read it HERE). It made me wonder what stories are being crafted today?

How will that powerful story change me?

What Gives Me Hope

As nostalgia sets in at the prospect of leaving the law school, the privileges I enjoy become more pronounced.  One of my favorites has been hosting the Interfaith Student Council.

Early this week, sixteen wonderful people—fourteen law students, one undergraduate student, and one lawyer—showed up for an evening of discussion (the lawyer took the picture above!).  This fine group represented various flavors of Christianity, Islam, Judaism, and Atheism.

The leaders offered two potential topics for the evening: a heavy discussion about the controversial Trump immigration executive order, and a lighter discussion of dating practices in various faith traditions.  The group decided to do both and briefly discuss the heavy topic before moving to the lighter topic.  It may be unsurprising in the rear view mirror, but we never made it past the first.

Early in the conversation, one of the kindest people I have ever known shared a personal story that involved a close acquaintance sharing things that characterized this person’s entire religion in a terrible light.  I don’t think this kind soul has the capacity for anger, but there was definite hurt.  And confusion.  I mean, what do you do when someone you know portrays you and everyone in your faith as evil?

Everyone tried to help, and a good conversation ensued.

Later on, after the conversation took several twists and turns, a different student spoke up—one who comes from the faith that was used to characterize the other student as evil—and directed remarks back to that tough situation.  And she apologized.  She apologized on behalf of her entire faith.  And then she started crying, which made the other student start crying, and if we weren’t careful it was going to get all of us but they hugged it out and gave us a fighting chance.

If I am honest, as I sit here and type away, you know how your tears like to hang out in your upper cheekbones watching television and how they stand up and put their shoes on when you start thinking about touching moments like this one?  Well, maybe that is happening right now, but you’ll never know.

At the end of the evening, I asked everyone what gives them hope when times seem dark.  Folks shared some great answers, but I have to tell you that what gives me hope is an evening like that one and an encounter like the one between those two wonderful students.

Some may look at the world right now and just see stormy weather, but in that one embrace I believe I saw a break in the clouds.