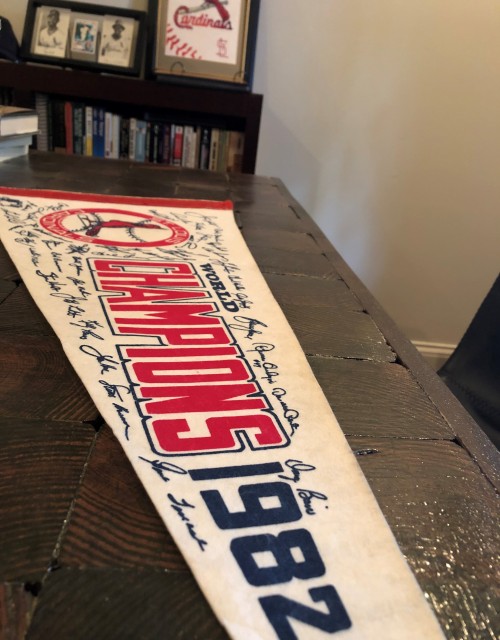 “Baseball has been good to me since I quit trying to play it.” – Whitey Herzog

The year was 1982, and I was adjusting to life in junior high school. I doubt I knew the word hazing, but I sure was nervous about going to the locker room, which was unfortunate since sports were my very favorite things.

But God smiled on me as a young baseball fan.

The combination of my dad and Paragould, Arkansas, made me a St. Louis Cardinal baseball fan, and 1982 was simply our year. Dale Murphy tore up the National League, and Robin Yount the American League, but destiny was with the Redbirds.

The previous winter the Cardinals added Joaquin Andujar and Lonnie Smith—and more importantly, Ozzie Smith—and during the season they called up young Willie McGee. In the summer they would draft future stars, Vince Coleman and Terry Pendleton, but it was Keith Hernandez and Bruce Sutter who were the beasts on the field in 1982. They led Whitey Herzog’s team into the playoffs for the first time since 1968 where they faced the Atlanta Braves.

It is a special memory. The Cardinals were my team, and I knew them so well from listening to Jack Buck on the radio. But Ted Turner’s young television “superstation” helped me know the Braves, too, and for a twelve-year-old boy enamored by all things sports, it was just special. That my team swept the series was icing on the cake.

It is disturbing how quickly thirty-seven years can pass, but here we are again. Times have changed, including baseball, and along the way I have watched the Redbirds go to the postseason fifteen more times, including six World Series appearances, but today I am remembering that first innocent memory: The Cardinals versus the Braves in the playoffs.

The Braves are loaded this year, and I would be surprised if my Redbirds survived the challenge. Honestly, I don’t really care that much anymore. Now, I simply like to watch and imagine Bob Forsch firing a fastball in to Darrell Porter on a fuzzy console television. Those two players aren’t with us anymore, at least in person, but they have never left my sweet childhood memories.