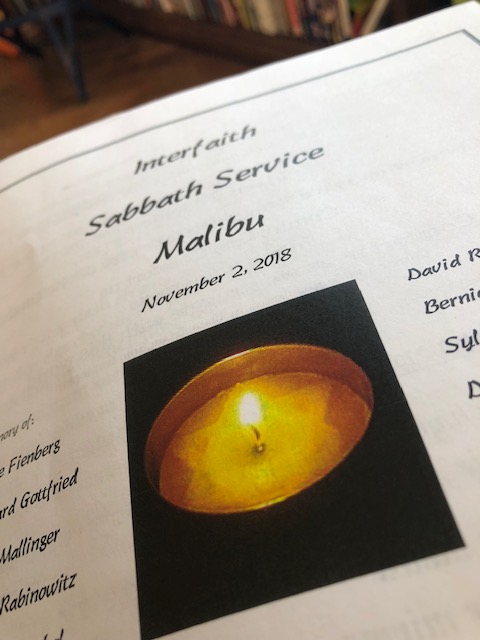 One week after the terrible mass shooting during Shabbat services at the Tree of Life synagogue in Pittsburgh, interfaith gatherings appeared all over the nation like tender flowers sprouting from the bloody soil.

My new friend, Rabbi Michael Schwartz, who is new to Malibu, graciously invited me to take part in an interfaith service at the Malibu Jewish Center & Synagogue as Sabbath began last Friday evening. Rabbi Schwartz conducted a beautiful service filled with thoughtful songs, prayers, and reflections, and the musical gifts shared by Cantor Marcelo and his special guests were deeply moving.

At the outset of the service, we who represented local clergy from various faith backgrounds, along with important community leaders, were invited on stage to light eleven candles in honor of the lives that were tragically taken in Pittsburgh. We were then asked to share a short blessing. Without knowing exactly what to say at such a difficult moment, I chose to share a quote from Dr. King’s famous mountaintop speech, the last before he was assassinated: “Only when it’s dark enough can you see the stars.”

Looking at those flickering candles and out at the diverse audience in the synagogue, I can say with confidence that I saw stars shining in the darkness.

There is plenty of darkness to go around. May we see the stars. May we be the stars.