Our youngest daughter started middle school when we moved from Mississippi to Malibu in 2008 and needed certain shots to enroll in school, (make up your own jokes friends from Mississippi and California, but be nice!) so we went to a local urgent-care facility and waited. There in the waiting room I met a super-friendly Pepperdine student who was the incoming president of the College Republicans at Seaver College. He excitedly shared with me his plan to place a large American flag on the magnificent front lawn of Pepperdine University for every life lost in the terrorist attacks on September 11, 2001. He said it was going to be awesome. I was impressed by both his initiative and enthusiasm.

He delivered. The display was such a success that Pepperdine immediately latched on to the idea, and this year marks the tenth consecutive year for the breathtaking “waves of flags” display.

Walking among the flags is an experience in and of itself, not to mention a photographer’s dream in the Age of Instagram, but my favorite thing to do is to watch the first responders and the veterans park their fire trucks and motorcycles on the iconic Pacific Coast Highway and walk up the hill to take in the experience.  They are far more inspiring to watch than the flags themselves.

In the early years, someone had the proper idea to place flags of other nations among the American flags to represent the correct nationalities of the victims of the attacks on that fateful day. After all, the attacks were acts of aggression against the entire world. International students and guests to campus are happy to find their flag and yet sobered by the reminder of the loss that flag represents.

We still remember that terrible day. In a year or two, incoming college students will remind us that they were not alive in the fall of 2001, but as of today the flags are still flying and those of us who remember still share our stories.

President Abraham Lincoln predicted that the world would soon forget what he said that historic Thursday afternoon in Gettysburg, Pennsylvania, but elementary school children still memorize his speech over 150 years later. Some things are simply unforgettable. 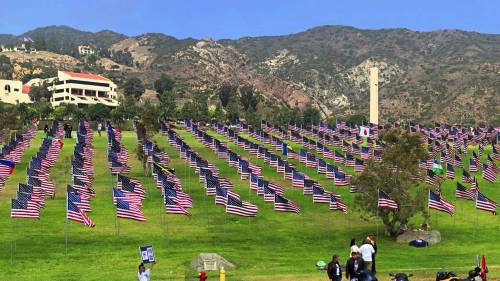