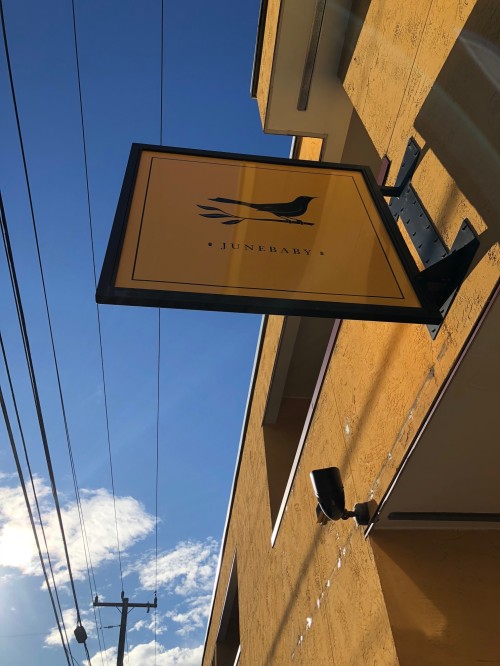 We signed our youngest daughter up for TIME magazine her senior year of high school when she indicated an interest in international affairs, but when she took off to Seattle for college I became the beneficiary of knowing what’s up in the world. As time flies and all that, that daughter is about to begin her senior year of college, and I thought I would sneak up to see her for a couple of days last week before the entire college experience slips away. As fate would have it I was reading TIME just before the trip and stumbled across the magazine’s inaugural run at identifying the “World’s Greatest Places.” The list contained one-hundred places from forty-eight countries on six continents and was chosen using factors such as “quality, originality, innovation, sustainability, and influence.” One of those one-hundred places is in Seattle, a restaurant featuring Southern food named JuneBaby.

Well, we are from Arkansas and were in Seattle, so we just had to go. We arrived when the doors opened and noticed an expected line out the door, but the wait wasn’t long. We enjoyed a delicious meal—gumbo for Hillary and catfish for me with wheat buns and honey butter to share. It was awesome.

But I don’t think it was the Southern food or even the ambience that landed this little restaurant on a list of the one-hundred greatest places on the planet. I suspect such a prestigious designation came from the beautiful idea behind the place.

Here is its self-description:

Southern food’s humble beginnings embarked when West Africans were taken from their home and were forced across the middle passage to North America. The term soul food originated during American slavery to not only describe a type of cuisine but also a period of time of oppression and overcoming hardships. It is traditionally cooked and eaten by African Americans of the Southern United States and merges influences from West Africa, Western Europe, and North America. As a result, America’s culinary history was built on corn, rice, peas, and the hog; many of the ingredients associated with Southern food. Southern cuisine has always had and continues to have stereotypical connotations. Seen through the eyes of most Americans as inferior, unsophisticated, and unhealthy, Southern food reflects hard times and resourcefulness and is nothing short of beautiful. It is a cuisine to be respected and celebrated.

Yep, that’s why I am suddenly in love with JuneBaby. It bears repeating: “Southern food reflects hard times and resourcefulness and is nothing short of beautiful. It is a cuisine to be respected and celebrated.”

Beauty can and often does rise from ashes. And when it does, it should be respected and celebrated in all of its various forms, including fried catfish and gumbo.