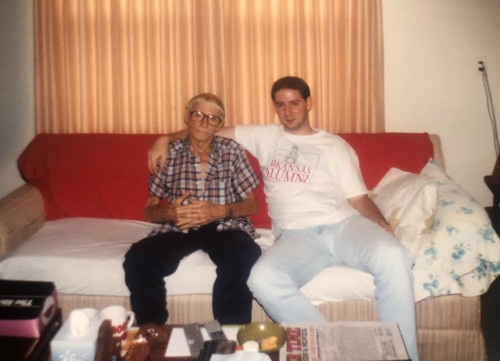 Mom wanted to name me Clint, but she “made the mistake” (her words) of saying, “I guess we could name him Al the third,” and as the story goes, the look on Dad’s face made it clear that she would lose the naming battle. Albert Andrew Sturgeon, III, it was—and is.

When I was born, Dad was my age now, three months’ shy of his 50th birthday, but despite the age gap he was my picture of strength. He had been an impressive high school athlete in the 1930s, and when I came into the picture in the ’70s and ’80s he showed no evidence of slowing down. He was a combination of war veteran, butcher in a meatpacking plant, and heavy smoker (Camels, unfiltered) that created a stereotypical picture at the time of someone who is “tough.” They called him Big Al and me Little Al, and I was proud of that arrangement. I was a scrawny kid, but I had a strong dad.

At some point, as life tends to do, everything changed. The Big Al and Little Al irony jokes commenced when I had an inexplicable growth spurt in high school and ended up 6’3 to Dad’s 5’8, and then when I was in college his health began to fail. When I returned to my hometown after college, it became obvious that he was dying.

The picture above is beguiling. By that time Dad spent much of his time on the couch, trying to rest, nibbling on crackers, negotiating with Death. He does not seem pleased that Mom wanted a picture of the two of us in his weakened state. I look so much bigger than him, which is such a perplexing role reversal that I keep staring at the picture as if it might right itself if I stare long enough. But it never does.

Dad has been gone for over twenty-five years now, and it dawned on me yesterday on Father’s Day that yet another type of role reversal is underway. My two daughters are now grown women, and although I have always been proud of them, there is a new kind of proud this year. Erica recently completed the Deaf and Hard of Hearing Credential Program at California Lutheran University and now teaches elementary-aged children in the Los Angeles Unified School District who have extra challenges in life. And Hillary has accepted a position as Shelter Operations Coordinator at Casa Marianella in Austin, Texas, a place that “welcomes displaced immigrants and promotes self-sufficiency by providing shelter and support services.”

My physical health is good as far as I know, and unless something very strange occurs, I will at least always be taller than those two daughters of mine. But when I think of what each of them has chosen to do with their precious lives in this crazy world, I shrink next to their tremendous strength. I find myself recovering that long lost “Little Al” and look up in admiration to my daughters as they show me what real strength looks like.

Do you want to know what I got for Father’s Day yesterday? I’ll tell you: I got two amazing daughters.