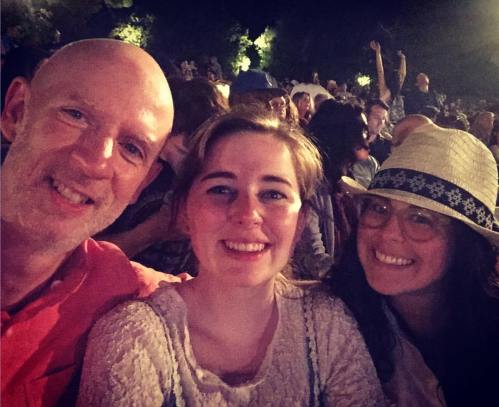 My sweet daughters took me to reggae night at the Hollywood Bowl last weekend for Father’s Day. It was a beautiful evening that featured Ziggy Marley, and it was extra special to hear him perform his father’s classic music on a day that honored dads.  It was also a little, ahem, “foggy” in the Bowl on reggae night, and let’s just say that I was glad it was an open air venue.

You can’t tell from looking at me, but Bob Marley remains one of my favorite artists. My daughters knew this, of course, and it was sweet of them to endure an evening of reggae with old dad even though reggae probably doesn’t crack the top ten on either of their favorite musical genres list. Those two girls are sure at the top of my list of favorites.

I went about this whole dad thing unconventionally. I fell in love with sweet Erica before meeting and marrying her mom and skipped straight to the homework and bicycles stage of Erica’s life. And I was there from the start with sweet Hillary, complete with diaper duty and sleepless nights and everything that followed. They are different people with different talents and different approaches to life, and I have had different experiences with each of them. But they are sisters and daughters together who love each other very much, and I love them both with my whole heart.

But it is one love.  And one heart.

Give thanks and praise to the Lord.  This dad thing has turned out all right.

It Will Be Alright

SCENE 1: It was August 2012 and the worst moment of my life. My mother was dying more rapidly than I and my sisters imagined, and I had spent the last hour holding her hand while she dozed in a special lift chair. The clock taunted me like an executioner. I knew that I had to fly back to California and leave her for the final time, and eventually, that time arrived. I went to grab my bag, but when I returned to say goodbye it was obvious that this would not go well. I stepped into another room to gain composure but failed, so I simply collapsed in loud tears into her shallow, yellowed chest, and through my sobs could hear her raspy, comforting, motherly voice whisper, “It’s going to be alright.” It sure didn’t seem so. When I stood to leave, I strode quickly out the door knowing that I would never leave if I looked back. A man should never have to turn his back on his dying mother, but I did.

SCENE 2: Three weeks later, I am on an afternoon flight from Los Angeles to Memphis. That night, through the miracle of air travel, I would sleep in the bed my mother died in that morning, two thousand miles from where my fateful day began. I reviewed the eulogy fortunately written the day before and fought off tears on what otherwise appeared to be a normal flight. Troubled and weary, I put away the notes and plugged in earbuds in a futile attempt at distraction and scrolled through the flight’s music offerings. For some reason, I selected Three Little Birds by Bob Marley and soon heard his hopeful, comforting, spiritual voice say, “Don’t worry about a thing, cause every little thing gonna be alright.” The tears flowed easily now, and if anyone noticed, I didn’t give a fill-in-the-blank.

SCENE 3: It is February 2016 in Malibu, California, and I am driving down the Pacific Coast Highway for a lunch appointment with a good friend. It is sunny, blue skies, seventy degrees, and heavenly. Lunch will be served by the Pacific Ocean with surfers bobbing in the waves. It has been a bit of a rough month personally, physically, and professionally, but I am recently feeling better on all fronts. Per usual, my Legend CD by Bob Marley & the Wailers is playing, and my old friend is reassuring me once again that every little thing is gonna be alright. Mom was right. Of course. She always seemed to be.