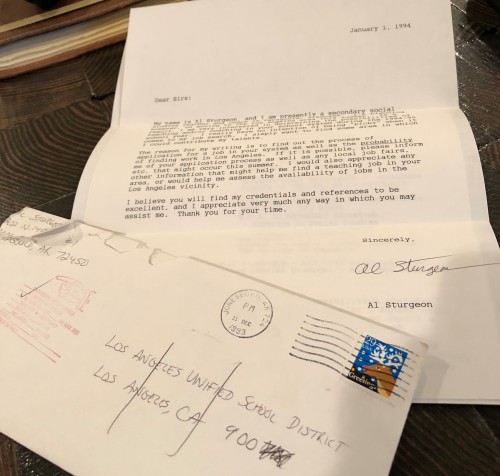 In December of 1993, over a quarter century ago now, I was a young high school basketball coach in Arkansas trying to come to terms with what it meant to truly follow Jesus. My struggle pointed toward the margins of society and the conclusion that I should go love people in places that others might not. Specifically, I decided to move to a major city and teach in an inner-city school, and although I had never been further west than Dallas, I chose Los Angeles.

I then went to tell my mother. That was no fun. I told her that I planned to drive (yes, drive) to L.A. on spring break to look for an apartment and return to finish out the school year before moving that summer to begin a new life. She was heartbroken. I, as you can tell, was clueless.

This was pre-Internet, at least for me, so I had no idea how to pull this off. On New Year’s Eve, I mailed a typewritten cover letter and resume to the Los Angeles Unified School District in an envelope with no street address and a zip code I must have found in the reference section of the public library. I somehow expected it would get there—by divine courier if nothing else.

I never made the trip. Instead, while at a high school basketball tournament on New Year’s Day—the same day I had dated the cover letter—a beautiful young woman introduced herself and changed my life forever. That spring break, instead of driving to L.A., I proposed marriage. That summer, instead of moving away, we married.

At some point, my letter to the Los Angeles Unified School District was returned to sender—by divine courier, I suspect, but via the local postal carrier. It remains to this day one of my prized possessions.

Fast forward to last week, and our oldest daughter accepted a job teaching deaf and hard of hearing children at an elementary school in the Los Angeles Unified School District. Same day, our youngest daughter—around the age I was when I sent that letter—began her post-college life using her bilingual skills at a middle school in the San Antonio Independent School District.

I don’t know what to make of any of this. Still, after so many years, I remain clueless.

Clueless, yes, but also amused at the irony of life. And proud of those two young women that I have had the privilege to teach and to love.

One response to “What Goes Around…”