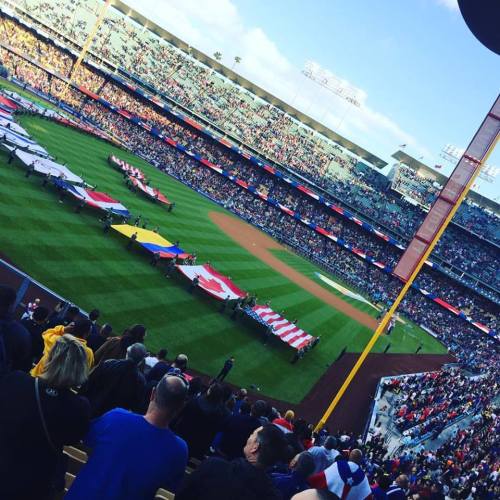 Dodger Stadium hosted the World Baseball Classic championship game last week, and I was honored to be in attendance as the United States claimed the title with an 8-0 win over Puerto Rico.  Like the Olympic Games, the WBC takes the field every four years, and it seemed appropriate that the USA finally won a title in its fourth try seeing as how we invited the sport and all.

My youngest daughter was home for spring break and agreed to hang out with old dad for the evening, and we knew it would be fun before we made it through the gate as the Puerto Rican fans made themselves known honking and cheering their way into the parking lot.  It just got better throughout the evening as fans of both nations/teams made their patriotism clear.  Our personal favorite was a gentleman who never stopped banging on a wok with a ladle throughout the marathon four-hour game.

The game was sort of terrible.  United States’ pitcher, Marcus Stroman, mystified the Puerto Rican bats while the American hitters scored early and often.  There was some excitement when Stroman carried a no-no into the seventh inning, but Angel Pagan’s base hit took away that fun and the victorious American squad anticlimactically went on to complete the blowout.

Most headed for the exits after the fireworks and confetti declared the world champions, but we stuck around for the trophy presentation.  So did the Puerto Rican team.  At one point, probably predetermined, after the victors paraded around the stadium and the runners-up watched in silence, the two teams met and hugged that from our vantage point beyond the left field foul pole looked like two sets of interlocking fingers.

And there was applause.

After hours of two competitors cheering, chanting, and heckling one another out of love of country, the two sides came together, and this apparently made everyone happy.

There is much contempt in this old world.  But the applause at Dodger Stadium last Wednesday evening reminded me that respect still has a chance.