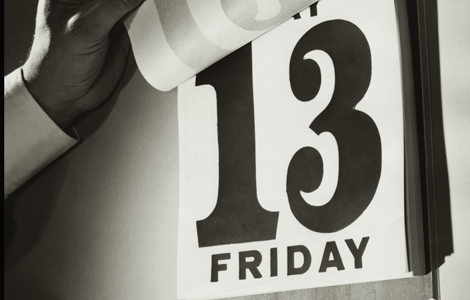 I suspect we are all more superstitious than we want to admit.  I don’t like to switch positions on the sofa when my team is playing well on television, which just makes tons of sense.  But, come on, because a particular numbered day falls on a Friday bad things are expected to occur?  That seems a bit illogical.

So I consulted my friend, Google, and searched “good things that happened on Friday the 13th” for proof that all this is silliness.  This returned several lists that shared the following highlights:

Um.  Those are the highlights?  Maybe I should stay indoors today.

It didn’t help to learn that some really bad things have happened on Friday the 13th.

And coincidentally (?) law school grades are released to our first-year students today.  This will be a particularly good day for several of our students, but experts in mathematics informed me that 90% of the students will not be in the top 10% of the class (I double-checked their math to be sure of this).  More disappointment than elation on the way.

So what to do today?  Well, I have to go to work.  But beyond that, I have a carefully designed plan of attack:

When I go down, misfortune will at least be worn out from the fight.