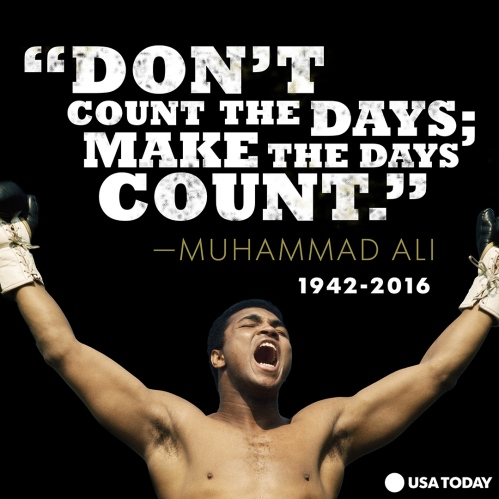 My dad was a boxing fan, which made sense for a member of what Tom Brokaw termed “the greatest generation.”  Boxing was the American sport when he was a boy in the 1920s and 1930s, and I remember his tales of the great Jack Dempsey as we watched fights together a half century later.  I somehow failed to inherit his love for the sport, but the combination of his love and the golden age of heavyweight boxing that coincided with my childhood unleashed personal memories when Muhammad Ali’s passing was announced last Friday.  Elvis Presley, John Wayne, and Muhammad Ali—those were the names that seemed larger than life to this little boy in small-town Arkansas.  Now, all three are gone.

That Ali is a popular American hero is fascinating.  I doubt that his outspoken racial pride and conversion to Islam in the 1960s endeared him to all who now mourn his passing.  I doubt that his refusal to accept military service makes him a hero to all patriotic Americans.  And his brash, in your face, “I am the greatest” trash talking is not typically the personality that leads to universal love and admiration, the Donald Trump phenomenon notwithstanding.

Maybe America just likes a winner?  I don’t buy it.  Call me crazy, but I’m guessing that Barry Bonds, Bill Belichick, and Floyd Mayweather, Jr. will not be universally adored when they ultimately move on from this life.

So, why did Muhammad Ali die an American hero?  Some say it is his social activism, his willingness to stand up for what he believed in.  Maybe so.  That has to be a part of it.  But I suggest there is something more to Ali’s universal appeal.

He was fun and funny and full of joy.  He lived without fear.  Think about it: the religious conversion, the brash statements in an era of racial violence, the thumbing his nose at the government’s draft, and the claims of boxing greatness all displayed that he was not afraid of any threat.

More importantly, he lost in the boxing ring multiple times—but came back for more with a smile.  Over time, in what seemed to be the cruelty of fate, the powerful and eloquent athlete lost his famed strength and good health and bold voice—but he came out in public with a smile.

I believe that is why we loved him so.  We want to live without fear, too.  We want to face both the goods and bads of life with unshakable joy.

Wouldn’t that be the Greatest?