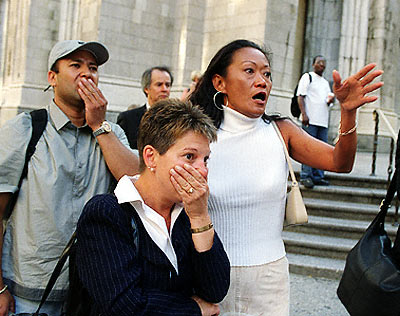 It felt important to visit the 9/11 Museum while in New York City last week. My wife and I successfully navigated the famous subway system and arrived mid-morning, allowing a couple of hours for a visit based on the website’s recommendation, but it took us three, and honestly, we were so overwhelmed by the emotion (and sheer size) of the place that we could have stayed all day. It was breathtaking in multiple ways.

It would take an entire book to describe the visit, so I will simply share one surprising thing that stood out to me over and over while looking at countless images of those looking on in horror that fateful day: Hands.

We are taught as children to use our hands to cover our mouths when we cough. We are taught in baseball and golf and tennis, for example, how to hold a bat/club/racket. We are taught as university employees during mandatory sexual harassment training where we can and cannot place our hands on colleagues and students. But we aren’t taught what to do with our hands when unspeakable tragedy occurs, and yet we must have all received the same memo from what I observed in those haunting photographs from September 11, 2001, like the one above.

Hands over mouth. Hands on head. Hands covering eyes. Hands reaching empty toward the sky. Over and over and over I kept noticing hands doing the exact same things. One exhibit featured the shirt of a Navy SEAL who served on the team that killed Osama bin Laden, and just above the shirt there was a picture of President Obama and his team watching intently from D.C. while the raid occurred. President Obama literally sat on the edge of his seat with a terribly serious expression on his face, but nearby sat then Secretary of State Hillary Clinton with her hands over her mouth.

I’m writing with zero research so I suspect there are sophisticated studies that explain this phenomenon, but I’m shooting from the hip here and guess that this natural physiological response is a primitive biological/evolutionary attempt at self-defense. When faced with trauma, the hands unconsciously respond to stifle a scream or protect oneself or punch someone else’s self like the fun little game where the doctor hits the bulls-eye on the knee with that little rubber hammer.

This observation and a tiny bit of reflection led me to consider the role of hands in the moments and days and years after that immediate instinctive reaction. I also saw pictures where hands shared hugs with the grief-stricken. I saw touching handwritten letters. I saw and heard and read many accounts of the hands that rescued life and cleared away the rubble. I saw works of art produced to honor the victims—in fact, I was spending time in and now writing about a spectacular museum and memorial for remembrance and healing that was designed and built by many hands.

There is the corresponding dark side, of course, in that hands brought the death and destruction that led to the need for all of this in the first place, but I left the museum thinking about how hands can bring life—and how they seem to want to bring life in the face of death.

Won’t you lend a hand for life?

One response to “Helping Hands”