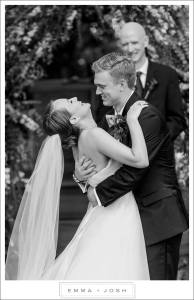 This holiday weekend included the opportunity to officiate the beautiful wedding of two special friends.  Top that.

My wedding officiant experience is rather extensive, which now includes seven for law school folks with three more in the queue.  In the early (read: pre-law school) years, my primary role was to keep the terrified groom from puking on his tuxedo prior to the ceremony (note: puke prevention responsibility presumably extended throughout the ceremony), but I have found that grooms with law school experience are a different breed–the Socratic method, law school finals, and the bar exam seemingly combine to make repeating after me in public far less intimidating.

There is one wedding officiant moment that is hands down the best.  It isn’t perspiring in public, which of course is great.  It isn’t staying on task despite the best efforts of Wedding Screaming Baby, although who wouldn’t love that challenge?  No, the best moment is when the bride appears at the back of the venue prepared to be escorted down the flower-strewn aisle.  The crowd rises simply out of respect for the beauty of it all, and everyone turns and stretches to catch a glimpse of the bridal march.  Except me.  I watch the groom watch the bride.  That is the best moment, and I see it all from the best seat in the house.¹

Brian could hardly stand it yesterday.  Brian is typically a reserved sort of guy, the kind who holds his cards close to the chest, but when Stephanie appeared, illuminated by the Georgia late afternoon sunshine on the arm of her loving father, he almost had to sit down.  We were all perspiring, but I am nearly positive that wasn’t perspiration happening inside his eyelids.

If love really is all we need (and it is), and weddings are the most vivid expressions of love (and they just may be), then yesterday I had the best seat for the best moment in the best expression of the best thing in the entire universe.  Yes, I am gloating.

I am convinced that the best things in life are not for sale.  My advice for you is to figure out what those things are and jockey for the very best seats.  As per usual, I accidentally stumbled into this one, but I can promise you that it is better than anything available for purchase on StubHub.

¹ For Bible fans: “…as a bridegroom rejoices over his bride, so will your God rejoice over you.” – Isaiah 62:5b