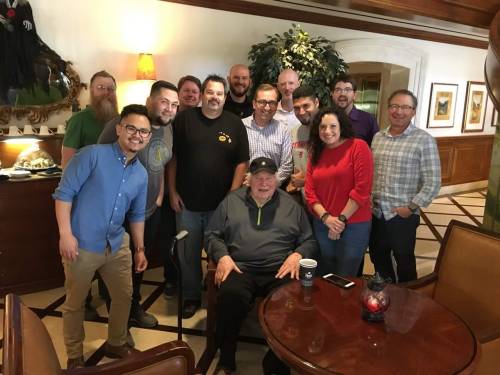 I flew to Oakland and back last Tuesday to facilitate a half-day session on conflict resolution for a group of pastors. The Uber driver from the airport to the conference did not stop talking for the entire trip, and on the flip side the driver that took me back said exactly two words–Which terminal?–in the full forty-five minutes. In between all that was an unexpected and cool experience.

The meeting was held at a quiet hotel in Pleasanton. Pleasanton, as you might expect, appeared to be a pleasant little town, and I was told that the lovely hotel was one of several owned by hall-of-fame football coach/broadcaster and video game legend, John Madden. That was cool enough, but what soon became way cooler was that John Madden himself was sitting in the lobby and someone, somehow, had arranged for our group to have our picture made with him! I nearly ran down the stairs to get there.

My first television football memory is Coach Madden on the shoulders of his victorious team after the Raiders defeated the Vikings in Super Bowl XI, and I can’t even guess how many games that followed where I enjoyed having Madden explain and entertain. Like, “There’s a lot of letters in Ladanian Tomlinson.” And, “If your hair covers your name, I guarantee you you’re going to get clipped.” Classic Madden.  “Boom!”

He is 82 years young now and as nice a guy as I had always imagined. Same wide smile. Same great voice. Same wit and sense of humor.

Through the magic of television the voice of John Madden is one of the narrators of my life journey, and honestly, one of my favorites. Likable, funny, non-pretentious, honest, and approachable. He was always just himself — and one of us. The best part of his famous fear of flying that had him criss-crossing the nation on a bus was that he didn’t fly over anyone. He was down to earth quite literally.